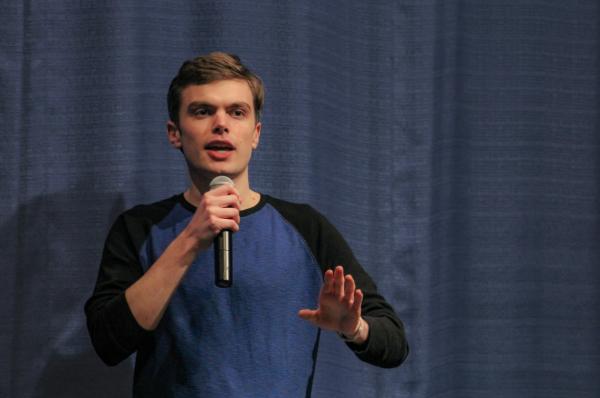 Owen Chase of Wexford, Pennsylvania, is the student marshal for the Eberly College of Science during Penn State’s spring commencement ceremonies on Sunday, May 8, on the University Park campus. Chase’s faculty escort for the commencement exercises is Robin Ciardullo, professor of astronomy and astrophysics.

"There is no doubt hundreds of people within the Eberly College of Science would have been similarly excellent choices for this honor,” Chase said. “I’ve seen firsthand over the past four years how intelligent, dedicated, and plain nice people are in Eberly, and I am beyond honored and humbled to get the chance to represent them.”

While at Penn State, Chase conducted research with both Ciardullo and Fe McBride, Eberly Postdoctoral Research Fellow in astronomy and astrophysics. Chase’s research focuses on the distance to galaxies. He and his collaborators have worked on the use of modern instruments to improve the distances computed via the planetary nebula luminosity function (PNLF). Chase’s honors thesis was on further improving the PNLF method by rebuilding it to correct for potential systematic effects. He hopes to eventually contribute to the resolution of the Hubble tension. Chase has also done some work in high-energy astrophysics.

In addition to his academic achievements, Chase is vice president of Second Floor Standup. He also participates in curling tournaments as part of the Penn State Curling Club, placing second in this semester’s tournament.

“Do things that scare you," he said. "I happen to be a very anxious person, and I struggle a lot to push myself outside my comfort zone. But at a place like Penn State, where there are more opportunities than you can shake a stick at, it’s so important and rewarding to challenge yourself, even if it’s in small ways. One of the most influential decisions I’ve made in my life was to go try to do standup one time. I was terrified, but it has led me to friends, experiences, and confidence that I could have only dreamed about.”

A graduate of North Allegheny High School in Wexford, Pennsylvania, Chase will be accompanied by his parents, Troy and Cherie Chase, his siblings, Seth and Corinne, and his grandparents Bev and Jim Chase, as well as Gerald and Shirley Hooker.