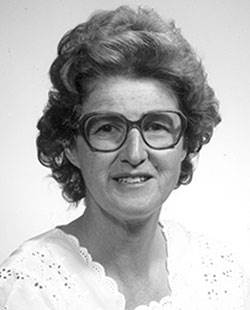 Jean Bennett was a highly decorated research physicist who was recognized for her contributions to the studies of optical surfaces and was the first female president of the Optical Society of America. Jean Bennett received her BA in physics from Mount Holyoke College in 1951. She did her graduate work at Pennsylvania State University, earning a Ph.D. in physics in 1955. She was the first woman to achieve that degree at Penn State. From 1955-1956 she was employed as a research physicist at Michelson Laboratory, China Lake, California. In 1956 she joined the Naval Weapons Center (now the Naval Air Warfare Center) at China Lake where she remained throughout her career, leaving briefly for visiting appointments at the University of Alabama, Huntsville and Stockholm’s Institute of Optical Research.

Bennett was an OSA member for 37 years. She served on the OSA Board of Directors from 1978-1980 and as OSA president in 1986. She was an editor for Applied Optics and Optics Express and also served on the Esther Hoffman Geller Award, David Richardson Medal and CEK Mees Medal committees. Bennett was named an OSA Fellow in 1972 and was awarded the David Richardson Medal, given for distinguished contributions to applied optics, in 1990.

(Adapted from the OSA Obituary for Dr. Jean Bennett available at http://www.osa.org/en-us/about_osa/newsroom/obituaries/bennettjean)