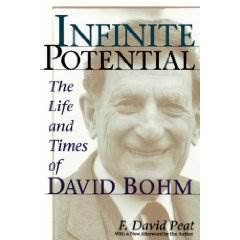 David Bohm was an internationally known theoretical physicist who was born in Wilkes-Barre Pennsylvania in 1917. He graduated from Penn State University as a Physics major in 1939 and went on to attend Caltech as a graduate student, transferring after one year to the UC Berkeley, working under Robert Oppenheimer. He made numerous contributions to theoretical physics, including introducing the Bohm Aharonov effect and helping to develop the formalism of the Einstein-Podolsky-Rosen (EPR) paradox. He was an active participant at the famous Shelter Island Conference on the ‘Foundations of Quantum Mechanics’ held in 1947. He also made contributions to neuroscience and philosophy. His life is discussed extensively in the biography entitled “Infinite Potential: The Life and Times of David Bohm”.

The David Bohm Award recognizes “…a graduating senior Physics major who has excelled academically and who has made contributions to Penn State outside the classroom in areas such as research or service to Penn State at the department, College, or University level.”

More information about David Bohm can be found at Wikipedia.