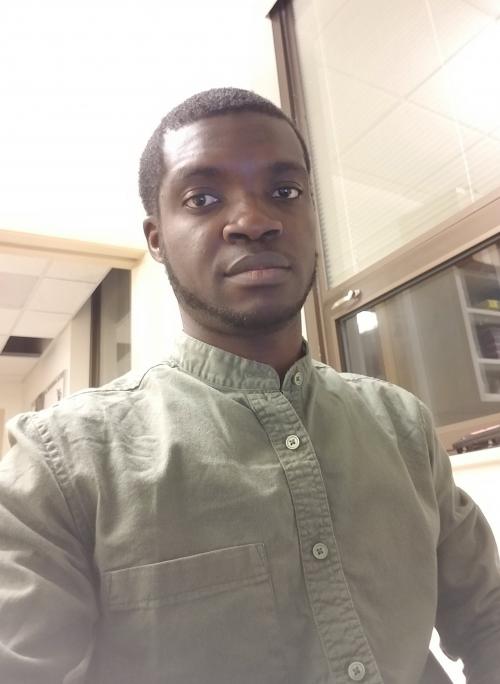 Meet Oluwasegun Akinniyi, a graduate student, originally from Ondo State in Nigeria, working towards his Ph.D. in the BMMB Program.  Oluwasegun’s love of science developed at the early age of 8 years old due to the love of science his late father, Lawrence Akinniyi, also shared.   Oluwasegun remembers spending time with his father and listening to him explain science in basic terms and using simplistic examples of the world around him.  “What made this intriguing was the fact that he often communicated it in the indigenous language (Yoruba), while Science was taught in the English language in school,” says Oluwasegun.

During his high school career, Oluwasegun found himself drawn towards the field of organic chemistry because of its applications in domestic, every day, materials and life processes.  This led him to pursue a Microbiology degree from Catholic University or America (CUA).  During his time at CUA his interests began to narrow as he became more and more exposed to the broad areas found within biochemistry.  Eventually Oluwasegun earned his Masters of Science degree in Biotechnology.

Due to a graduate level course entitled “Gene expression and regulation”, taught by Dr. John Choy at CUA, Oluwasegun’s interest in the area of biochemistry grew developing his new passion of better understanding the stories, drama, and details regarding gene expression.  It was this new passion that led him to Penn State and the BMMB Program.  “While searching for graduate programs, I found that Penn State’s BMMB program had an entire center within this area of study, The Center for Eukaryotic Gene regulation (CEGR) and so the program automatically attracted my love,” said Oluwasegun.  “On my interview weekend, I enjoyed the BMMB community, and the State college setting is similar to my undergraduate institution too.”

Currently, Oluwasegun is one of our BMMB students, conducting his research in the Reese Laboratory under the guidance and mentorship of Associate Department Head for Research and Faculty Development, and Professor of Biochemistry and Molecular Biology, Joseph Reese.  The Reese Laboratory investigates the roles of the Ccr4-Not complex in the regulation of gene expression, entailing transcriptional and post-transcriptional regulation; areas that span transcription, mRNA decay through protein degradation (ubiquitilation).

Oluwasegun’s research focuses on the deadenylase activity of the Ccr4 subunit of the multisubunit protein complex on mRNA.  Deadenylase is the first step in the degradation of mRNA, which are intermediate macromolecules in the path from the interpretation of the genetic material (DNA) into proteins (such as enzymes). The degradation of mRNA is a control mechanism enabling optimal levels of expression of genes, and it proceeds with the removal of the poly(A) tail.  The Ccr4-Not complex is one comprising 9 proteins (meaning it is a multisubunit complex). The roles of some of these 9 subunits in the regulation of gene expression have been identified, and these include regulation of transcription, coupling of translation to mRNA decay, regulation of mRNA decay among others. Two of its subunits – Ccr4 and Caf1 have been implicated with the degradation of mRNA as deadenylases.

In summary, the Ccr4 protein is one of the subunits in the Ccr4-Not complex. Although each subunit has its role, Oluwasegun’s focus is on the Ccr4 subunit and its role in the removal of the poly(A) from mRNA.  This removal of poly(A) is the first step in the degradation of mRNA in cells and helps to control the magnitude of expression of genes. “When the cell needs certain proteins to adapt to a change in conditions/environment, there is a need for upregulation of the expression levels of such genes, and downregulation of some undesired genes,” says Oluwasegun.  “This regulation is the importance of our protein of interest.” 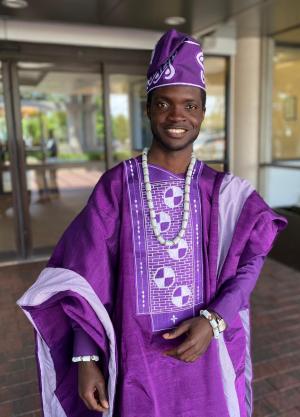 Oluwasegun is a very driven individual and credits this to the competitive environment he grew up in while in Nigeria.  He found himself in competition for every opportunity that was available, from the ability to attending college to winning scholarships.  “Opportunities are limited in underdeveloped countries,” says Oluwasegun.  “It was very necessary that I drew up my goals and set purposes for every goal on my path.”

Regarding his motivators, Oluwasegun has many.  “Maybe it’s because I pay attention so much that I see a success story in everyone's path however far they have come in the relevant areas of their lives,” he says.  A major inspiration in his life is his brother who always dreamt of becoming and engineer and constantly seeks out opportunities to grow.  “He is never complacent; always seeking new challenges and aiming for new heights,” says Oluwasegun. 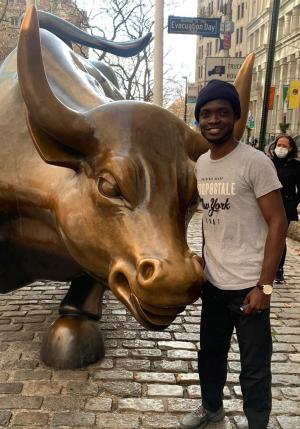 Outside of the Laboratory, Oluwasegun enjoys spending his time writing, following financial market news, and conducting market analysis when able.  After his voluntary youth service in Nigeria, he began researching investment opportunities for his savings, having remembered his mother and father saying that they wanted to buy their children shares of stock.  He joined forums and discussion groups focused on money market and capital market investments, and after three years of learning, and “having my fingers burnt”, he grew a passion for trading.  To this day, Oluwasegun is an avid and passionate investment trader.

With regards to Oluwasegun’s writing, it was again his father who encouraged him to develop his skills.  “My dad started discussing English vocabularies with me as an area he wanted me to develop interest in,” says Oluwasegun.  He currently belongs to two poetry groups and publishes essays, mostly on life and living, on social media that give people hope and raise awareness to moral ethics.

When asked how he believes his writing, in partnership with his science background, could touch people’s lives, Oluwasegun said “Scientific research is either poorly funded or not funded at all, just as is science education, in most African countries. A lot needs to be done in this regard; enlightenment through writing would sure achieve a lot. Outside of science and education, I echo hope in my writings, but in the near future, I would want to, through my articles, contribute to guiding adolescents.”

Oluwasegun serves as a great example of how love for science, combined with a desire to educate others, and intense dedication and drive can help change the world.  The Department is extremely fortunate to have Oluwasegun as a. part of its Team and looks forward to following his career in the future.

Congratulations Oluwasegun for serving as an example of why We Are Penn State!