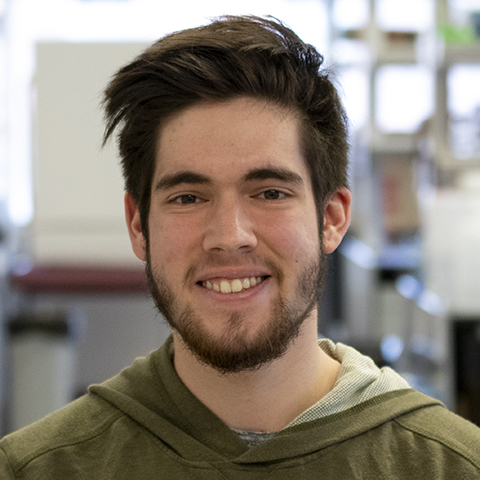 Meet Mitchell Godin, a graduate student from Sandy Hook, Connecticut, working towards his Ph.D. in the BMMB Program.  Science was consistently his favorite subject growing up and no matter if it was from watching Bill Nye the Science Guy or learning about the universe, he always found science fascinating.  Mitchell has always had the support of his parents, especially his father who pushed him to pursue his dreams and taught him to constantly strive for success.  Thinking that success as a scientist meant becoming a medical doctor, that became his goal throughout middle and high school.  It was during this time that he received his first introduction into experimentation, and while many moaned and groaned at the thought of 3-hour laboratory periods, Mitchell’s excitement grew.

Although Mitchell’s interest in science grew, he was still unsure as to what he wanted his scientific pursuits to be. He wondered if his love of science could instead be just a childhood fixation.  It was by working at his local library that Mitchell was able to gain clarity and begin to develop his career path.  Originally, he began working at the library simply because he loved to read, but as a result of constantly being surrounded by books, he began to be introduced to topics that he never thought would interest him.  “As morbid as it sounds, I became very interested in the drastic effects of diseases through reading about ebolaviruses and the bubonic plague,” said Mitchell.  With this new-found interest he reached out to his chemistry teacher, Mr. Carly, developing a relationship that would shape his undergraduate career.  Mr. Carly was always happy to talk with Mitchell and helped expand his knowledge on the subjects he was reading about.  “I looked to him for advice regarding potentially starting a career as a scientist,” said Mitchell.  “He recommended majoring in neurobiology in physiology at the University of Connecticut.”

Mitchell did just that and began his undergraduate career as a student at the University of Connecticut (UConn).  Although he initially came to UConn as a neurobiology major, he altered his trajectory as a sophomore and switched to majoring in molecular and cell biology, while also minoring in chemistry.  During the summer prior to his junior year, Mitchell began working as an undergraduate researcher in the laboratory of professor of molecular and cell biology, James Cole.  The Cole Laboratory studies proteins associated with human disease.  Mitchell’s project within the laboratory focused on protein kinase R, an innate immune response protein that can be activated when viral RNA invades host cells.  “I found the project to be extremely rewarding,” he said.  As an undergraduate researcher he began to shift his interests away from attending medical school and towards scientific research instead.

Mitchell came to Penn State based on a conversation he had with Cole where Mitchell asked him if he would recommend pursuing a graduate degree working in a laboratory similar to his own.  Cole supported Mitchell’s decision to pursue a graduate degree and recommended several schools, including Penn State, where research was being conducted similar to Mitchell’s.  “Penn State was by far my favorite school that I visited,” said Mitchell.  “The grad students were very helpful, welcoming, and knowledgeable of not only the program but the department’s research.”  He also found the diverse, yet highly collaborative, research interests within the Biochemistry and Molecular Biology Department refreshing compared to many of the other programs he had visited.  “Not only were the professors I interviewed with very interesting, but also many of the one’s I met in passing caught my eye showing the great research opportunities within the department,” said Mitchell.

Currently, Mitchell works in the Lindner Laboratory under the guidance of Associate Professor of Biochemistry and Molecular Biology, Scott Lindner.  The Lindner Laboratory’s work couples molecular parasitology and structural biology to understand the malaria parasite (Plasmodium), to identify and exploit weaknesses in the parasite’s development and transmission.  Utilizing cutting edge sequencing technologies, such as Oxford Nanopore Technologies, Mitchell’s research within the laboratory analyzes genes important for proper infection in each stage of the parasite’s lifecycle.  Mitchell believes that his work can offer insight into what genes are essential for the proper transmission of malaria and could be expanded upon, by using transgenic parasites, to identify what assists and hinders infection.

Outside of the laboratory, you can find Mitchell spending time in his favorite hobbies, running, reading, and playing Dungeons and Dragons.  Although he was a distance runner for a year while in high school, he didn’t become serious about it until he entered college.  “I used it to lose weight, but started to truly love it,” said Mitchell.  When he started, he would run ten miles a week, but by the end of his undergraduate career he had worked himself up to 70 miles a week.  Mitchell finds running to be a great form of stress relief, saying “it makes me forget about all work-related things and drama in my life, only focusing on whatever pain that run is causing me.”

Mitchell finds reading to be a form of escapism and loves reading fantasy and science fiction.  His love for reading stems from his previously mentioned work in his local library.  During the summers as an undergraduate he would average reading 2 books per week, checking out a book whenever he had downtime within the laboratory.  His love for fantasy and science fiction also spurred his love of Dungeons and Dragons(D&D).  “My love for the fantasy worlds I read about made me want to write my own stories, and I found D&D to be a perfect outlet for that,” said Mitchell.  As a junior in college, he began writing campaigns for he and his friends to play every weekend.  Today, since transitioning into graduate school at Penn State, he has been able to convince others within his cohort to give D&D a try and unleash their imagination.

Mitchell, like many other graduate students within the department, serves as an example of how a student’s interests evolve over time and how through reflection, continued curiosity, and mentorship a student can evolve along with them.  The Department is very fortunate to have Mitchell as a part of our amazing and dedicated Team, and we look forward to following his career.  Thank You Mitchell for serving as an example of why We Are Penn State!