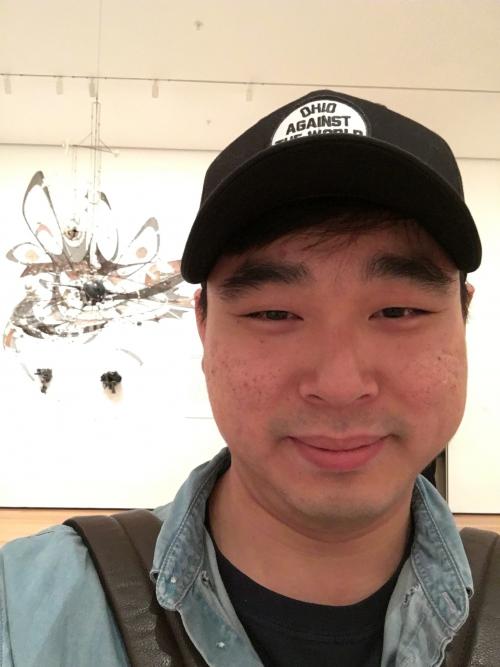 Meet James Lee, a graduate student working towards his Ph.D. in the BMMB Program.  James grew up in an environment filled with people, and opportunities, that allowed him to engage in science.  His father, Sung, is a recently retired electrical engineering professor and his mother, Myung, is a registered nurse who operates her own home health agency.  In addition to his parents, his older brother is a biochemist and his little sister also studied science in college.  Growing up James remembers how he and his brother would spend time in his father’s laboratory conducting simple experiments with him.  “I remember when I was 7 years old, I got to look at an onion cell for the first time under the microscope,” said James.  “I was so intrigued that I could look at something so small that I couldn't see with my bare eyes.”  James’ parents also encouraged both he and his sibling’s interest in science by attending science camps and supported their education process, whether in a science related field or not.

James’ love for science, along with the support he had received growing up, led him to attend

for his undergraduate studies, where he later graduated with his bachelors degree in Biology.  After graduating from OSU, he continued his education at Korea University located in Seoul, South Korea, where his research focused on yeast metabolomics.

After graduating from Korea University, with his masters degree in Biotechnology, James returned to his hometown of Columbus, Ohio, and worked as a laboratory manager/research technologist in the laboratory of Dr. Michael C. Ostrowski and Dr. Sudarshana Sharma at his alma mater Ohio State University.  There he participated in research focused on identifying, and understanding, enhancer networks that regulate the genes involved in osteoclast differentiation from bone marrow macrophages.

It was James’ experience working with Dr. Sharma that developed his interest in eukaryotic gene regulation and led him to continue his education and learn more about how it affects biological processes.  He sought out a university that would allow him to work with research faculty that studied gene regulation in eukaryotes.  It was this that led James to choose Penn State to earn his Ph.D. and to get involved with the Center for Eukaryotic Gene Regulation.  “The Center for Eukaryotic Gene Regulation is a great community of PI’s and researchers that share a common interest, said James.  “Also, their dedication towards training students, intrigued me to apply.”

As a BMMB student, James conducts his research in the Bai Laboratory, under the leadership and guidance of Associate Professor of Biochemistry and Molecular Biology, and Physics, Lu Bai.  The Bai Laboratory uses a variety of strategies to understand the mechanism of gene regulation in eukaryotes studying chromatin structures at different levels.  James’ research within the laboratory is focused on the molecular mechanism, and understanding, of how transcriptional hotspots are formed in the yeast nucleus.  Transcription is a fundamental process that occurs in every eukaryotic cell.  Abnormal transcription in a cell can often lead to fatal consequences for the cell, which can lead to diseases such as cancer.  Therefore, fundamental understanding of how transcription occurs in the cell is vital to understanding cell biology.

The transcriptional hotspots James is researching are specific locations in the nucleus that contain clusters of co-regulated genes with multiple molecules of RNA polymerase II and other transcription factors.  They are believed to be formed because of multivalent interactions of proteins, DNA and RNA to drive transcription of co-regulated genes rapidly and efficiently.  Using fluorescent microscopy, James is working to visualize these hotspots in a live cell with a fluorescently labeled transcription factor involved within the hotspot.  Additionally, by purifying the different proteins involved in the hotspot, he is studying how the proteins behave in solution.  Through his research James is currently identifying important residues of the proteins involved in the interactions.  He is also investigating how the deletions of these parts affect transcription and cellular processes.

Outside of his role as a BMMB graduate student, James holds the most significant and important role of his life as both a husband to his wife, Eunju, and a father to his 4-year-old son, Caleb.  “I'm a PhD student who is also learning to be a husband and a father,” says James.  “As a result, my family is my biggest motivator.”  James has experienced a number of setbacks, including the COVID-19 pandemic, that have derailed his time as a graduate student, but says that working with his family and his supportive advisor, Lu Bai, has really helped him rise above them.  “People with young children will understand that kids will want your attention whenever you are around, and my wife has been so supportive in that aspect,” he says.  “While working from home most days, my wife and son have been very supportive in giving me personal time during the day to be productive.”

When not in the laboratory you can find James hiking the nearby trails of Centre County and surrounding areas with his family, tending the plot of land next to his house, and enjoying the semi-rural State College lifestyle.  You can also find James on the golf course.  When asked if he would consider himself an avid golfer he says, “My dad and brother are avid golfers, I was gifted a set of clubs last year.”  While not an avid golfer, golfing is something that he enjoys and tries to do whenever he gets the opportunity.  “I love the feeling of when the club hits the ball just right at the sweet-spot,” says James.

James, and his dedication to both his continued education and family, serves as an example of how a scientist can further the frontlines of scientific discovery while also raising and caring for a family.  The Department is very fortunate to have James as a part of its Team and looks forward to following his career in the future.

Congratulations James for serving as an example of why We Are Penn State!