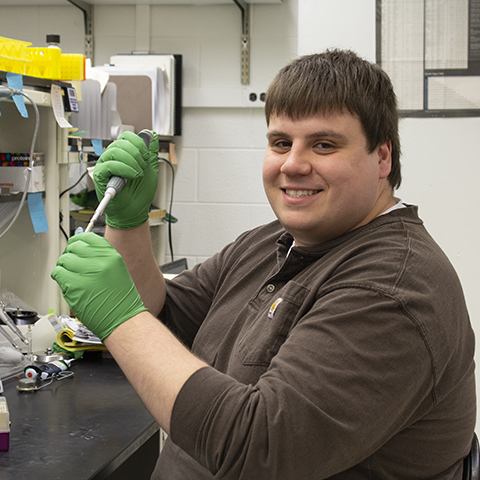 Meet Jacob Potter, a graduate student from Madison, West Virginia, working towards his Ph.D. in the BMMB Program.  Growing up he held a fascination, and curiosity, for how things worked.  Jacob’s father is a mechanic and, “I loved watching him take things apart and fix them when I was little,” Jacob says.  To Jacob though, there was no more complicated, or beautiful, machine that that of living things.  “The seemingly infinite complexity and elegant interactions presented by biology were an inevitable calling to me,” he said.  “Additionally, I could be no more honored than to have contributed to science that improves human lives and prevents disease.”

This calling, and desire to contribute, led Jacob to attend Marshal University, where he earned his bachelor’s degree in Biochemistry.  He chose to attend Penn State to continue his education because of its rich environment and the diverse opportunities the University made available to its students.  “Many of the universities I interviewed with didn't have the resources or sense of community that Penn State has.” said Jacob.  “There was something unique about the collaborative institutes here, that I didn't see at other colleges, that seemed more like a group working together and less like a bunch of like-minded individuals.”

Currently Jacob works in the Weinert Laboratory under the mentorship of Associate Professor of Biochemistry and Molecular Biology, Emily Weinert.  The Weinert Laboratory focuses its research on understanding the signaling pathways that allow bacteria to sense and respond to their environment. Using tools ranging from chemistry to biochemistry to molecular biology they are developing a molecular level understanding of the proteins and small molecules involved in these systems, as well as their role(s) in bacterial growth and virulence.

Since they affect every aspect of human life, ranging from metabolism and immune health to food chain and air quality, Jacob has focused his research within the Weinert Laboratory on the study of bacteria.  Specifically, he studies a group of proteins referred to as Globin Coupled Sensors (GCS).  These proteins are capable of sensing oxygen in the air and are thought to control how many bacteria respond to a change in conditions.  Additionally, they have also been implicated in their ability to infect a host.

Globin Coupled Sensors sense oxygen levels using a heme molecule, much like that in hemoglobin.  The presence of oxygen bound to the heme causes structural changes to the protein that changes the activity of its diguanylate cyclase, producing a signaling molecule called 2',3'-c-di-GMP (GMP).   Cyclic GMP is a known signaling molecule whose levels have the ability to affect phenotypes such as biofilm formation, motility, and even virulence. These changes are part of the bacteria's transition between their motile and sedentary life phases.

Jacob seeks to better understand these GCS’s, which he hopes one day will lead to new therapies against antibiotic resistant bacteria and improve crop yields.  “Since these proteins exist and seem to control virulence in a variety of human and agricultural pathogens, substances designed to inhibit or otherwise interact with these molecules may cause bacteria to have less severe disease phenotypes,” said Jacob.  “These newly designed substances could weaken the bacteria to the point that the immune system alone can defeat the infection, or most likely be combined with other antibiotic therapies to provide more rapid clearance of the bacteria.”  Jacob believes that his work can better equip other laboratories around the world to design such substances in the future.

Outside of the laboratory Jacob enjoys exploring new things and expressing his creativity through writing, drawing, playing the guitar, and cooking.  For as long as he can remember he has had a passion for reading, especially in the genre of fiction.  “I have been enraptured by the detailed worlds created by many writers I admire and thought it would be fun to create my own,” said Jacob.   He has tried his hand at writing, penning mostly short stories, but has toyed with creating thriller, fantasy, and some politically oriented stories as well.  “I enjoy writing as a creative outlet, but I think what I enjoy the most is the world-building aspect of it,” he says.  “I think it’s fun to create a world from a hypothetical viewpoint, try to depict the consequences of that hypothetical, and then try to tell a story from the perspective of someone living in that world.”

Jacob’s interest in drawing, and art in general, developed from his father.  “My dad used to make funny little newspaper-style comics to make us laugh when I was growing up, and I wanted to try and make some myself,” said Jacob.  Drawing his inspiration from the world, he creates mostly natural or urban landscapes as well as still-life paintings.  “I enjoy preserving the particular point of view I have on a particular scene, sometimes changing it slightly in shading or shape to reflect my mood or that of those around me,” he says.

Jacob’s father was the inspiration for another of his interests, playing the guitar.  “My father played the guitar, which is what inspired me to start practicing,” he said.  “I really liked rock music and I really wanted to be able to make music like that myself.”  In high school it was his dream to be in a band, although he and his bandmates were never able to find a singer for their group.  “One of the problems of growing up in a smaller town,” he says.  This never stopped Jacob from pursuing his love of the guitar, as he spent lots of time with friends and family “rocking” in jam sessions.

“Cooking is one of the few arts which is its own reward,” says Jacob.  “Good food is certainly better than bad food, and the big difference is knowledge, skill, and a little money.”  Inspired by his grandma Jacob loves spending time in the kitchen.  “She taught me the basics of southern cooking when I lived nearby, and I thought it was interesting how different techniques and ingredients could completely transform food and its flavor,” says Jacob.  He says that since cooking is a skill everyone needs to know, why not become good at it.  Due to his spending time with his grandma in the kitchen, he is quite comfortable with southern cooking, but always looks to broaden his horizons.  Currently he is expanding his knowledge and honing his techniques through recipes from the French and Asian cultures.  “I like baking deserts from these cultures as well,” he says.  One day he hopes to develop his skills to the point where he can begin creating his own recipes and move past simply making his own mark on recipes created by others.

Growing up in rural West Virginia, Jacob had the privilege of having the outdoors become his playground.  With his early years spent on his grandparent’s 500 acres of wilderness, he always found something new to explore and discover.  Because of this Jacob found a love of hiking, camping, fishing, backpacking, cycling, gathering plants, and otherwise exploring the great outdoors.

Having always had a heart for helping others, Jacob always looks for ways to give back.  Along with other members of the Weinert Laboratory he has helped founding the organization, Students for STEM.  A brainchild of President, Yasha Duggal, the organization focuses on community outreach, getting students in both middle and high schools interested in STEM careers, and helping to retain STEM majors currently enrolled at Penn State.  The organization is still in its infancy but has been working to establish partnerships with other affiliated groups.

We are proud to have students like Jacob as part of our department.   Jacob’s desire to be at the forefront of scientific discovery, his work to push the boundaries of society’s current understanding of scientific principles, and his desire for equality has positioned him to become a leader within the science community.  “I believe that science is the foundation for our future, and the more people we have contributing to this foundation, the brighter our future will be,” says Jacob.  “It’s a shame that women and minorities are prevented from pursuing scientific careers, since brilliant minds can be found just as often among them.”  Jacob believes that “There is absolutely no basis for discrimination against gender or race, and I look forward to inspiring the next generation of thinkers, regardless of their background.”