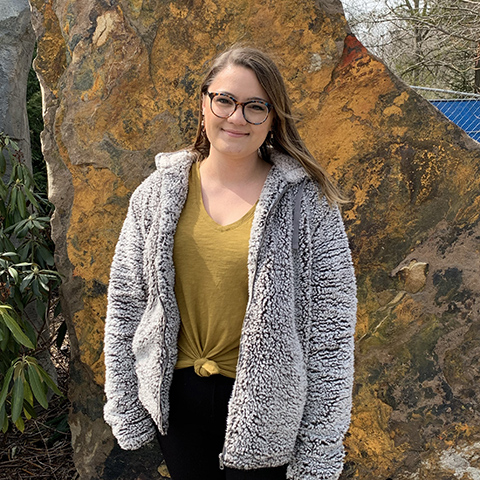 Meet Holly Kleinschmidt, a graduate student working towards her Ph.D. in the BMMB Program.  Her love for science developed at a young age.  “Growing up, my parents recorded episodes of NOVA, a science documentary series on PBS, and we would watch the show as a family in the evenings,” she said.  “Sometimes, we would watch Animal Planet or National Geographic instead, but NOVA was definitely my favorite show.”  NOVA often highlighted famous geneticists, biochemists, and medical doctors along with the work and advancements they were developing.  Because of this, Holly found herself becoming more and more interested in topics such as DNA, the human genome, as well as precision medicine.  She recalls how exciting laundry day was as a child, because that meant that she was able to watch NOVA while folding clothes.  “The show explained complicated topics in a way that even a fourth-grader like me could understand, which inspired me to begin thinking and imagining scientifically,” said Holly.

Holly continued to think and imagine scientifically and attended Saint Louis University (SLU) where she earned her Bachelor of Science degree in Biochemistry and Environmental Science.  While at SLU, after the conclusion of her junior year, she was offered a position in Penn State’s Chemistry REU Program.  During the ten-week program she conducted research in the laboratory of Distinguished Professor of Chemistry, and of Biochemistry and Molecular Biology, Philip Bevilacqua.

As an undergraduate researcher at SLU, Holly studied the protein-world hypothesis for the origins of life which proposes that proteins were the first molecules to evolve, and that these proteins led to the synthesis of macromolecules like DNA, RNA, and other proteins.  Through her work with Phillip Bevilacqua she was able to broaden her understanding and study the RNA-world hypothesis which suggests that RNA evolved before proteins and was able to catalyze the formation of proteins, DNA, and other RNA molecules.

It was through this REU program that Holly was introduced to Penn State, the BMMB Program, and all the opportunities they afforded.  “During that 10-week program, I performed research alongside graduate students in [Bevilacqua’s] lab, and they inspired me to apply to Penn State’s BMMB Ph. D. program,” said Holly.  Currently, Holly works under the guidance of Associate Professor of Biochemistry and Molecular Biology, and Physics, Lu Bai.  The Bai Lab uses a variety of strategies to understand the mechanism of gene regulation by chromatin structure at different levels. 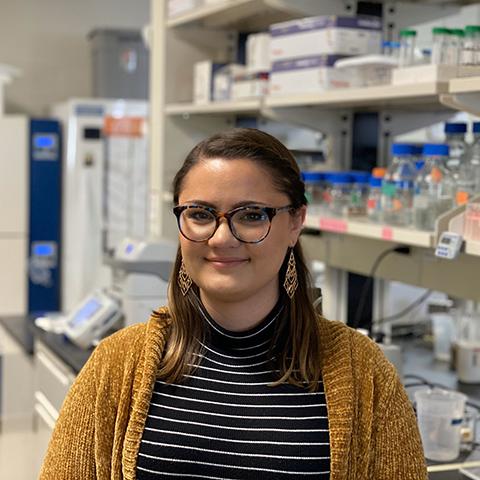 While most of the laboratory studies chromatin, a substance consisting of DNA and protein found within eukaryotic cells that allows DNA to be packed tight enough to fit into a cell, Holly’s research investigates the epigenetic factors that influence transcription factor binding in mammalian cells.  Her research studies how proteins, known as transcription factors, in humans open-up Chromatin and recruit other proteins, known as transcriptional machinery, to allow genes to be expressed.  “Understanding transcription factors is important for understanding how and why certain genes are or are not expressed in the cell,” says Holly.  “This knowledge may help us model human diseases and develop therapeutics.”

Currently, due to the pandemic, Holly is using supercomputers to run bioinformatics analyses, but normally she uses next generation sequencing instrumentation from Illumina to perform ChIP-seq and ChIP-ISO experiments.  These experiments result in millions of ~200 – 300 base-pair long fragments of DNA she then sequences using next-generation sequencing tools through Penn State’s Genomics Core.  Once she receives the raw sequencing data, she uses complex computational methods on a bioinformatics platform called Galaxy to systematically analyze the millions of sequences.  Through her analysis she is seeking to understand the extent her transcription factor of interest is binding throughout the human genome.  She does this by identifying how many sequences align to the human genome at each position.

Outside of the laboratory, Holly serves as the incoming President of the BMMB Graduate Student Association (GSA), as well as Public Relations Officer for Penn State’s Chapter of Graduate Women in Science.  As President of the GSA, Holly is focused on continuing to foster a sense of community among BMMB graduate students, in spite of the fact that students have been unable to convene in person in light of the COVID-19 Pandemic.  She is adamant about continuing traditions, such as Lion Lunch, first-year mentoring events, and town halls, so that students can continue to discuss research, share their thoughts and concerns, and connect with their peers.

The overall mission of Graduate Women in Science, established in 1921, is to build a global community that inspires, supports, recognizes, and empowers women in science.  Penn State’s Chapter accomplishes this mission by staying true to its three guiding principles of Connect, Lead, and Empower, while also organizing local outreach events, professional development programs, social events, a yearly networking conference, and monthly meetings for graduate students in STEM fields at Penn State.  In her role as Public Relations Officer, Holly is responsible for communications to the organization’s membership of upcoming meetings and events, as well as overseeing content on the website.  Due to the organization’s commitment to elevating the voices and stories of minority members of the STEM community, Holly has recently launched a Trailblazer Tuesday social media campaign which tells the stories of underrepresented trailblazers in STEM. 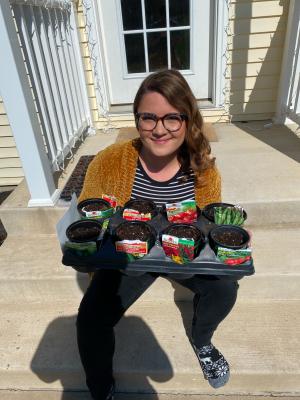 In what free time she has, Holly enjoys activities such as reading, hiking, playing video games, geocaching, gardening, and all things food.  When it comes to reading, she enjoys reading non-fiction books, mostly on topics she is curious about, but has not yet had the opportunity to learn.  “I also morbidly love to read True Crime books,” she admits.  Currently she is reading “The Whole-Body Microbiome,” which is focuses on the microbes that co-exist in our bodies and how they can help/harm us. 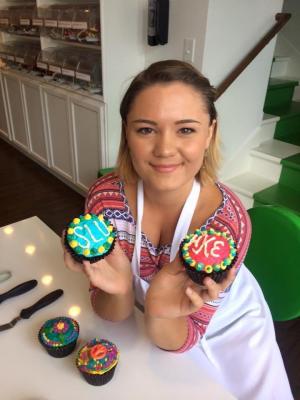 Holly credits her love of food to her mom who has spent her career in the food industry.  “She worked as a caterer for most of my childhood, and she would often come home from parties with lots of leftover appetizers and desserts,” said Holly.  “I would often help her cook dinner, and she would teach me cooking tips she had learned being a caterer like how to julienne herbs and make a roux.”

Once Holly became more confident in her cooking abilities, she took responsibility for cooking family meals.  Because of her mom’s excellent teaching, Holly has become a talented chef, and has developed quite the competitive relationship with her mom when it comes to cooking and baking.  “We hold an annual cookie baking competition and I am proud to say that I have won five years in a row!” she says.

Holly, like so many of our graduate students, has continued to develop her love and knowledge of science, while displaying a high level of dedication towards scientific discovery.  As a Woman in STEM she has a message for all women who are looking to pursue, or are currently pursuing, a career in STEM.  “My advice to women in STEM is to make your own opportunities,” she says.  “Figure out what it is that you want (a fellowship, a travel award, to research at a different institution for a few weeks, etc.) and start Googling and asking around.  Be persistent and vigilant, and eventually, you’ll stumble across the perfect opportunity.”

Well said Holly!  We are very proud to have her as part of our department, and We Are Penn State!