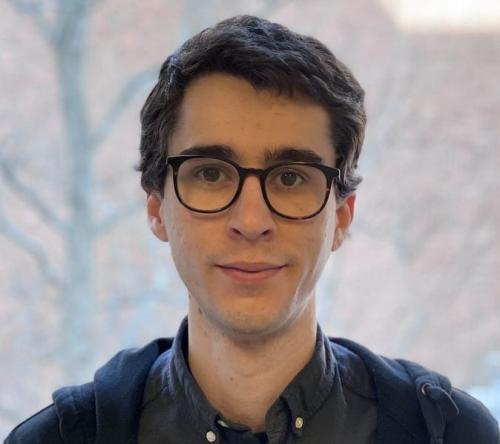 Meet Ethan Morgan, a graduate student from Los Angeles, California, working towards his Ph.D. in the BMMB Program.  Ethan’s first engagement with science came from the early influence of his father, Glen Morgan.  Although his father’s background was based in writing, science often played a pivotal role in his work.  Whether through books, documentaries, films, or trips to science museums, Ethan’s father exposed his to the great triumphs of science and its ability to explain the world around him.

Ethan remembers watching films such as 2001: A Space Odyssey, Blade Runner, Planet of the Apes, and Star Wars with his father and being inspired to look beyond what we know is possible to what could be possible.  This brought him to authors like Arthur C. Clark, Phillip K. Dick, and Kurt Vonnegut who largely wrote about what it means to be human, and how science and technology complicate that understanding or allow people to think about it from a new perspective.

As Ethan entered middle school and began to learn more, he developed a fascination with evolution and its elegant and infinitely complex explanation of the driving force behind life.  His love for science continued to grow throughout his childhood and when he graduated from High Tech High School, in North County California, there was no question whether he would pursue his undergraduate education.  He chose to do so at The University of California, Davis, where he majored in microbiology.

While pursuing his undergraduate degree, Ethan began searching for the school where he would challenge himself with the next phase of life, graduate school.  His attention quickly focused on Penn State’s Biochemistry, Microbiology, and Molecular Biology (BMMB) Program.  “The multi-disciplinary nature of the BMMB program strongly appealed to me,” said Ethan.  “It is invaluable to have access to experts in many different fields and disciplines as it offers the opportunity to choose to be a part of variety of exciting research and allows for investigation into complex questions that demand a multi-disciplinary approach.”  Also, a key factor that raised Penn State above the rest was the university’s commitment to providing its researchers with cutting edge equipment through its core facilities.  Additionally, Ethan found the financial and career resources Penn State provided its graduate students to be extremely supportive and inviting.

Currently, Ethan is a BMMB Graduate Student working in the laboratories of Professor of Molecular Toxicology, and Biochemistry and Molecular Biology, Andrew Patterson, and H. Thomas & Dorothy Willits Hallowell Chair of Agricultural Sciences, Gary Perdew.  The laboratories focus their research on understanding the host-metabolite-microbiome axis, and understanding how biological systems respond to exogenous chemicals, respectively.  Ethan has been a member of the two laboratories for the past six months.

Every person has a unique community of microbes living in their gut composed of trillions of cells that span the microbial domains of life.  This community is capable of consuming and producing tens of thousands of different chemical compounds. The focus of Ethan’s research is on understanding which microbes produce a specific set of these compounds that are derived from tryptophan, an amino acid that is an essential part of the human diet.

These compounds activate proteins, namely aryl hydrocarbon receptor (AHR) and pregnane X receptor (PXR), that alter human gene expression.  By understanding the metabolic link between microbes and humans, Ethan hopes to provide answers that lead to a better understand of the human gut microbiome and its role in improving gut health, treating inflammatory bowel disease, development of colorectal cancer, and potentially in treating neurological disorders, like Alzheimer’s, Parkinson’s, and depression.  Ethan’s hope is to conduct biomedical research with an eye on factors that disproportionately affect people based on socioeconomic factors.

Outside of the laboratory, Ethan has many interests saying “I probably have more hobbies/interests outside of science than is responsible for a graduate student.”  He loves learning about history and takes every opportunity to do so he can via podcasts, books, museums, and trips to historic locations.  He says his favorite part of world history is learning about the political and economic history of the Greco-Roman world.  “I learn about history largely to understand the world we live in, and I think Rome has had a particularly outsized influence on the world, with both positive and negative consequences,” says Ethan.  He does point out that his interest in this topic is not in glorifying what was often a cruel, unjust, and domineering society, but instead to better understand our own society and its injustices.

Unfortunately, Ethan’s travel to historic locations around the world has been confined to North America.  He has visited many obvious locations in United States history in New York, Boston, and Washington D.C., but has also visited many important historical locations for certain groups of indigenous peoples preserved in national parks such as Yosemite, Glacier Bay, Devil’s Tower, and Death Valley.  He also points out that not all his tourism is so serious, as he and his father have visited the “Black Mailbox” on the Extraterrestrial Highway near Area 51.  The “Black Mailbox” is a place where people deliver letters for aliens.

Food is also an important interest Ethan shares with his partner, Kyra, as they often find themselves cooking, baking or working on a fermented food project.  Being vegetarians, he and Kyra tend to gravitate towards foods from cultures that tend to cook more vegetarian dishes, as well as Mediterranean and Indian foods.  “We have been baking sourdough-based breads for a few years now,” says Ethan.  “Ironically, our bread baking decreased during the pandemic, but we still regularly make things (bread, biscuits, crackers, waffles, pancakes, etc) with our sourdough starter. I especially like to make rye bread (different than rye deli bread) because it’s hard to find in the US and has a very unique flavor.”

Ethan likes to try to make different fermented foods because “You can start to appreciate how different fermentation conditions affect the taste and texture.”  He also enjoys these projects because it also ties back to my scientific interests as my work is centered on the gut microbiome and we have questions about how different dietary components affect microbial fermentations. Because he does not have a lab in his apartment, yet, he sticks towards fairly simple projects.  “I regularly make yogurt and maintain the sourdough starter that I referenced in the previously, but I’ve also made pickles, kombucha, fermented berries, and naturally carbonated ginger beer,” he says.

Ethan serves as an outstanding example of how a love and interest in science can be sparked by science fiction and pursued in order to discover what could be possible.  In addition, the fact that his interests far exceed those simply contained within the laboratory, and that he seeks to gain understanding in all that he does, helps to make him the scientist he is today.

Congratulations Ethan for serving as an example of why, We Are Penn State!