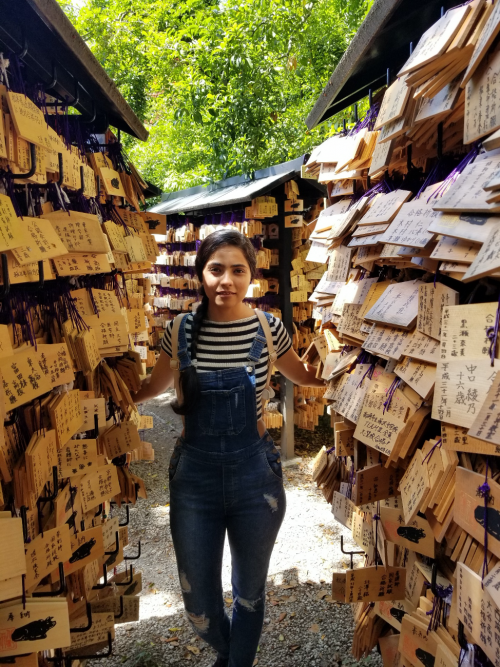 Meet Dhwani Patel, a graduate student working towards her Ph.D. in the BMMB Program.  Originally from Gujarat, India, she moved to the United States in 2013 to be reunited with family.  Growing up, Dhwani’s neighborhood had many kids living in it, yet these kids were between eight and ten years older than her.  Because of this, she spent much of her time by herself.  This time spent alone fueled her curiosity and helped to develop her observation skills, pushing her to constantly learn about the world around her.  She recalls spending time making toys from wet playground soil, which has a soft clay-like texture, playing lots of puzzle games, and working to develop relationships with the street animals within her neighborhood.  “My curiosity became my best friend and it has been keeping me company ever since,” says Dhwani.   “I believe that's the reason for my interest in science, as science is the subject which allows you to ask many questions and encourages you to find answers.”

Dhwani’s curiosity eventually led her to attend Sardar Patel University in Gujarat, India, where she earned both her bachelor’s degree in Biotechnology, as well as her master’s degree in Medical Biotechnology.  After arriving in the United States, she attended Illinois Institute of Technology, in Chicago, and earned yet another master’s degree in Microbiology.  “I thought it would be beneficial for me to get familiar with the [United States] education system, and teaching, here before I enroll into any PhD programs,” said Dhwani.

Dhwani chose Penn State to pursue her Ph.D. because of the extensive list of faculty that BMMB provided, each with diverse research projects.  Additionally, Penn State and BMMB’s collaborative environments led her to believe that the University would provide for her excellent opportunities.  “I thought Penn State could serve as an excellent platform to learn, and collaborate, with other research groups within different research areas,” said Dhwani.

Currently Dhwani works under the guidance, and alongside, of the H. Thomas and Dorothy Willits Hallowell Chair in Agricultural Sciences, Gary Perdew.  The Perdew Laboratory investigates how biological systems respond to exogenous chemicals.  Specifically, the laboratory focuses on one specific protein found within cells called Aryl Hydrocarbon receptor (AHR).  AHR plays a significant role in toxin metabolism upon exposure to harmful pollutants and other environmental toxins.  People are constantly exposed to industrial, and environmental, pollutants such as halogenated polycyclic aromatic hydrocarbons (HPAH), which are toxic and can act as carcinogens within the human body.  Upon being exposed to these, the AHR then binds to the toxic compound and becomes activated.  The activated AHR then translocates to the nucleus and binds to another protein called Aryl hydrocarbon receptor nucleus translocator (ARNT).  AHR/ARNT then binds to a specific DNA sequences in the promoters of genes, leading to gene expression.  These genes encode for proteins, or enzymes, that help in metabolizing the toxins into less toxic chemical compounds which can then be excreted from the body.

The Perdew Laboratory specifically investigates the role of AHR in head and neck cancers, as current therapies for these have limited success rates, especially for patients whose cancer is spreading to other organs.  By understanding the molecular mechanisms mediated by AHR, the laboratory seeks to understand how AHR activation increases head and neck cancers progression and metastasis in other organs. This knowledge has the potential to help researchers develop new drug compounds which can block AHR function in cancer cells, thereby preventing them from metastasizing in other organs in cancer patients.  Indeed, there are now biotechnology companies that are developing novel compounds that block AHR activation.

Only in her second year of her graduate program, Dhwani does not have a specifically defined research project but has a broad understanding of her future research.  Dhwani plans to focus her research on the discovery of cytokine or chemokine encoding genes regulated by AHR.   She believes that by understanding how AHR regulates the expression of such cytokine genes she can discover one of the molecular mechanisms involved in metastasis of Head and Neck squamous cell carcinoma (HNSCC), which is regulated by AHR.  If her research is able to discover the molecular mechanisms involved in the metastasis of HNSCC, then potential AHR inhibitors can be used to target AHR to prevent metastasis of HNSCC along with other cancer treatment therapies.

Outside of laboratory Dhwani enjoys doing yoga.  “Growing up in India, the country where Yoga was originated, my parents inspired me to participate in it from early childhood,” said Dhwani.   “As I have practiced more, I have developed a deeper understanding of Yoga practices.”   She has practiced for more than 7 years and says that the day feels empty if she doesn’t make time for it.   “To me, it has always brought peace in chaotic times and has inspired me to persevere,” she says. 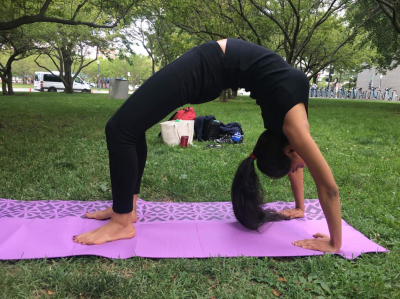 Dhwani is also an explorer at heart and loves traveling to new countries and experiencing new cultures around the world.  Her travels don’t include large groups of family or friends though, instead she enjoys traveling alone.  “When I travel alone, I have complete freedom and control over my schedule, and I can plan to spend time on activities I like the most,” says Dhwani.  “It also gives me time to think about many things.”  She says that having to be responsible to every decision made while traveling has helped her become more independent, responsible, and brave. 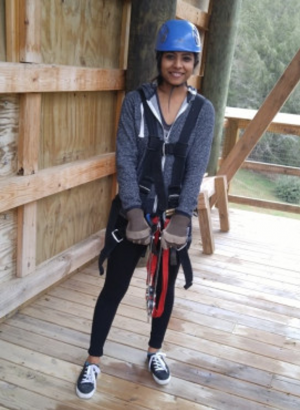 So far Dhwani has travelled internationally to both China and Japan.  Although not considered international, she has also travelled to Puerto Rico, which she found to be culturally different than that of the Continental United States.  One of her favorite ways to experience each culture is through their local customs.  “I was very intrigued by Japanese customs,” said Dhwani.  “I really liked bowing while saying thank you in Japan.  It felt respectful and felt very nice when I bowed to respect, and thank, others.”  Dhwani also recalls her involvement in a Japanese tea ceremony, which has its own set of rules for both guests as well as the host, each having deep meaning.

Although traveling opens the door to new opportunities, it also provides many challenges as well.  One major challenge Dhwani has encountered in her travels is the language barrier.  “I could find a few English-speaking people in major cities, but it is hard to find them in small towns or remote countryside areas,” says Dhwani.  “For me, it is also a great chance to learn a few words/sentences in different language.”

Dhwani’s travels have helped her learn about herself and have taught her to be fearless and independent.  Traveling has also afforded Dhwani the opportunity to spend time with herself and think more introspectively.  “Experiencing a totally new place has given me a different perspective about certain problems, or situations, in my life,” Dhwani says.

The Biochemistry and Molecular Biology Department is proud to have graduate students like Dhwani in the BMMB Program.  Her skills and talents, combined with her innate desire to embrace different cultures and gain perspective, make her an invaluable asset.  The Department is fortunate to have Dhwani in its graduate program and looks forward to following her career and witnessing all of her future achievements.